Background - the making of an Army

As I said in my last post, my Blood Angels have been a living project for many many years. At the start, I just collected units that I liked with no real thought around their place within the wider 40k Universe. In the early stages at least, I played more to win than to build a narrative.

Having joined the Police, I took a break from the wider hobby for a few years. Although I still kept up with the early range of Black Library books - including the first Gaunts Ghosts novels, I didn't paint or play any games for a long while.

All that changed when I moved to a new area and started regularly going to the local GW - here I found a group of gamers that were involved in building fluffy, realistic armies. This was, for me, the impetus to start gaming again.

From there I participated in a store run Sabbat Worlds campaign and found that building the history and background of the army was way more fun than playing to win. At this point, the Blood Angels 5th Company became 'my' army.

They were relatively successful in the campaign, but it provided a spur for me to add new units and try new army builds, all the while adding history and background to my growing force.

Hot on the heels of the Sabbat Worlds campaign came the GW worldwide campaign for Medusa V. This was another turning point - I started to become more active on the forums across the net, most notably Bolter and Chainsword. Together, on the forum dedicated to the UK Astartes players, we hatched our plans, wrote background, told tales of battlefield heroics and painful losses and showed off our new units. I made a number of friends from that forum, some of whom have become lifelong mates.

What spurred us on was the input that GW had during the campaign, releasing newsletters and including our battle reports in the official despatches from the Campaign. For me at least, this remains a high point of my hobby. 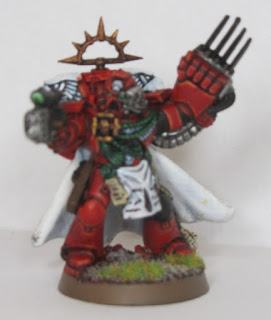 
Hopefully the writing above isn't too small, but above is what I based my Medusa V force around, along with a smattering of characters. My initial inspirations were the Blood Angels from Blood Quest and Jim Swallows Blood Angel novels.

Sadly, like all good things, they end and for me, it was the closure of the Enfield GW. I tried other clubs but didn't really settle anywhere, so again my painting and army building dried up for a short while, at least until I started a regular plog on Warseer. Now, love it or hate it, for me the Painting forums on Warseer were awesome, really supportive, loads of inspiration and I used that to start actively working on my army again. From there, luminaries such as MegaNutz, Petay, Sheep and SpikyJames, amongst others, all provided me with the inspiration and drive to carry on building my army. 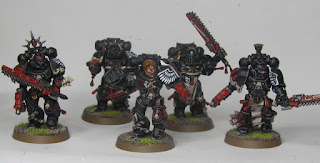 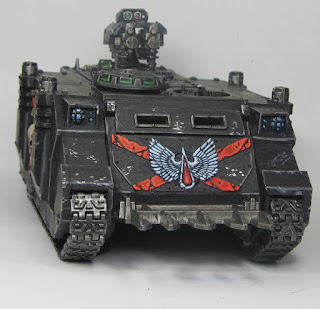 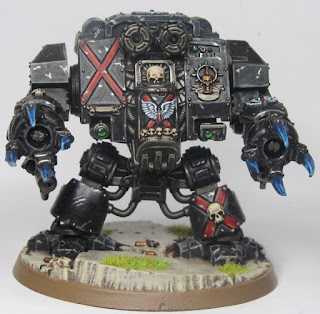 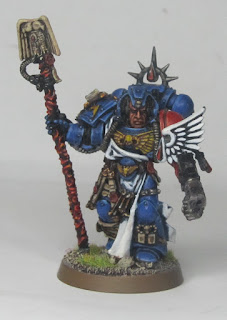 All of the above images are from the period when I first started my Warseer Plog - as well as learning new painting techniques, I learnt about miniature photography (still very much a work in progress!)

I still didn't get much gaming done though. Although I enjoyed the painting and building a force, I wanted to get more involved in gaming again. That all changed when, with the advent of groups on Facebook, a load of the old Enfield regulars started a group hobby log which then turned into Games and Theory. Look it up, it's a great group of people. From there, we started arranging quarterly games at the Wayland Games centre in Essex (great place to meet up and throw some dice) and I started to get my gaming mojo back.

Which brings us to the present day, although my Angels had taken a back seat for another project, I still wanted to add to them. With the HH rules and models, I started adding relic tanks to the army, but, as with anything, as my painting skills improved, I became less happy with my older models. They still looked ok on the table top, but when compared against my newer work, I realised that I would never be happy until I redid parts of my army. At that point, I embarked on the complete rebuilding of my 5th Company, a tale that shall be recounted in further posts.

Well, if you got this far, well done, I didn't intend for the post to be so long! Thanks for reading - stay a while and enjoy the ride!

Welcome to my first attempt at blogging. I'm Dave and I'm a geek. Specifically, a war gaming/painting geek.

For the last 25 years or more, ever since my mate Al showed me his copy of White Dwarf, I've been an avid participant in the world of Warhammer 40k. I've tried many armies, but in the end, I keep coming back to my first, Blood Angels.

Ever since I saw the front of Space Crusade and then later on having had my first forays into Space Hulk, the Angels of Death have always occupied a special place in my hobby heart.

So this is where this blog comes in. I've tried capturing my progress on painting logs on Warseer and Bolterandchainsword under the name Punkfish. I dabble in hobby groups on Facebook and Flickr, but for some time, I've wanted to have my own little corner of the web to call my very own. This is it.

I'm no competition level painter, and I game for fun but hopefully my posts will keep you entertained. As a starter, I'll post some pics of my Blood Angels and an old Guard army before moving onto the newer stuff.

Let's get with the photos shall we?

These first photos show my Blood Angels as they stood in 2010. A large majority of the models were over 10 years old at this point. My Blood Angel force is based around the 5th Battle Company, otherwise known as the Daemonbanes.

I'll follow with the fluff in another post, along with some character introductions and close up shots.

Hopefully I've whet your appetite for some more, thanks for reading guys :-) 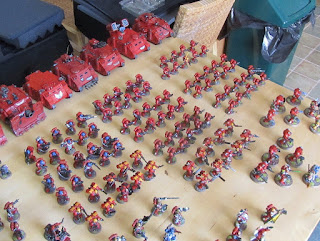 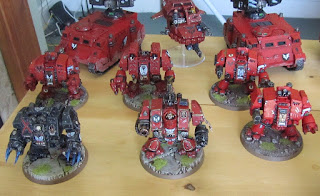 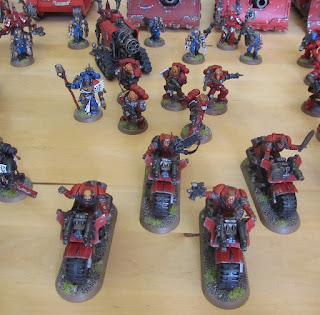 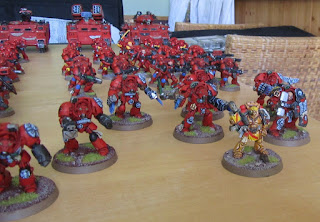 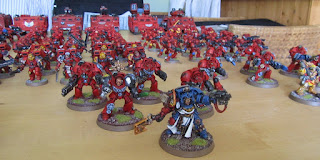